How to feed corn snakes?

Corn snakes are mainly found in the southern United States and Mexico. This snake has a relatively mild temperament and can live up to 15 years if kept properly.

Corn snakes are one of the most popular species on the reptile market. The ever-changing colors and patterns are his most attractive places. Most corn snakes have more than one recessive gene, which allows them to vary widely in color and style.

Morphology of the corn snake

Not only are corn snakes attractive in appearance, they are also very likable in character. They are very docile and suitable as pets. There are a variety of body colors and patterns, the longest body length can reach 182cm, and the body is relatively thin.

Corn snakes come in a variety of colors, usually gray and taupe to khaki, orange, and more. Based on these colors, there are red or reddish-brown markings, bordered by black. The abdomen has light and dark plaids, and there are straight stripes on the ventral surface of the tail. This snake is the most mutated subspecies, and the snakes in the same nest have horizontal and vertical stripes. A variety of different body color variations have been bred. Such as albino type, light yellow type, light red type and colorless type, vertical stripe type. 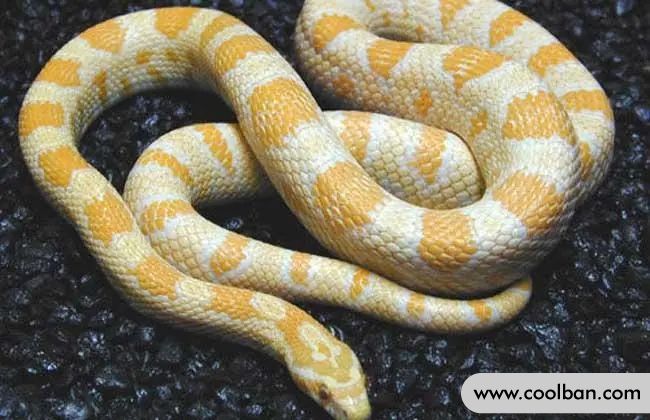 Feeding corn snakes requires a box that is more than 1.5 times the size of the snake's roll. An incubator with a lid, shelter (optional), and a basin pad are recommended (simple newspapers can be pretty, just buy aspen sawdust). In winter, you'll need a 15W heating pad and a thermostat.

Corn snakes are very sensitive to some conditions such as temperature, light, smell, vibration, etc., and do not adapt very quickly. Give it quiet surroundings, clean water and a place to hide. Never play with new snakes or rush to feed them. Let it sit quietly for at least three to five days without looking around the terrarium. Give it time to acclimate to the new environment and wait until the acclimation period is over before feeding it. Don't worry that it will starve to death, the snake can go without food for a long time.

Snakes need abdominal temperature, so using a heating pad works better than a light bulb. But be careful not to get too hot, it will burn. If your hands feel hot on it, it's too hot. Better to put a tile on it. 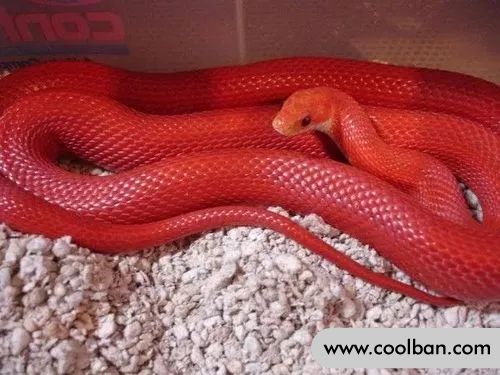 The control of temperature and humidity in the environment where corn snakes are raised is critical. The temperature is controlled at 24-30°C during the day and can be maintained at around 19-23°C at night. There is no special requirement for humidity, as long as it is kept dry. However, the temperature should be raised after feeding to help digest the food.

Corn snakes must be housed in a ventilated and sturdy enclosure, and a sturdy locking top must be installed to prevent them from coming out. Some dead branches can be placed in the breeding box for them to climb, and it can also help them retain their skin when they molt. Shake off the old hide, the substrate can be crawler sand or wood chips, or even artificial turf or newspaper, as long as it can be kept clean and easy to clean.

The substrate can be 1-2cm thick aspen sawdust or old newspaper, which can be ready for hiding, but will hinder later taming. Set up a sturdy water bag in the tank for drinking and bathing. Also have a low-wattage red light bulb available for nighttime use. In addition to watching at night, it can also be used for normal insulation purposes. In winter, electric felt can also be used to keep warm.

New corn snakes may refuse to eat in their new environment. At this time, the owner doesn't need to worry too much and don't feed it, very few snakes starve to death. Let them get used to their new environment first, then feed them every few days. If the corn snake refuses to eat, it is recommended to wait 48 hours before feeding, and the food types should not be too single.

Most corn snakes are bred in captivity and should be fed under artificial conditions, not fish and eggs. Corn snakes raised in captivity are mainly eaten by small mammals, often mice. Feeding suckling mice when they were young, and gradually increased. Once a week, preferably one at a time.

How to Raise a Golden Python

What is the feeding environment of the bearded dragon lizard?

What is the breeding environment like for pig-nosed turtles?

How to feed Sulcata tortoises?

What should I do if the turtle's eyes can't be opened?