Ruby fish are strong and easy to raise. However, because the ruby ​​fish is relatively fierce, it is easy to attack other tropical fish, and it will also devour other species, so try to keep the ruby ​​fish alone.

The body of the ruby ​​fish is spiny, slightly flattened on the sides, the caudal fin is fan-shaped, and the trailing edge is straight; the body length can reach 16 cm. The ruby ​​fish is colorful, the back is green algae, the abdomen is red, the dorsal, anal and caudal fins have red edges, and the whole body is flashing with small red and blue bright spots, such as gems inlaid on the body, it is a very spectacular and famous ornamental fish one. The female ruby ​​fish is about 10 cm long and can be used for breeding, and the male fish is smaller. During the breeding process, the body color of the broodstock becomes more showy, especially the females.

Like most cichlids, its reproductive trait is self-pairing, displaying strong juvenile-protective behaviors. The optimum conditions for reproduction are pH 7.0-7.2, hardness 7-9, water temperature 25-28°C. Likes to spawn on smooth rocks or smooth slate. Ruby fish do not have high requirements for water quality. More suitable for neutral water quality, not suitable for weakly acidic and weakly alkaline water. Farming this fish is not difficult. This fish differs from other African cichlids in that they are not hatched through their mouths but are bred in the open. To breed, the male sweeps out a bed on smooth stone and guides the female to lay eggs in it. The eggs are arranged in a ring, and the number is about 250-300. The broodstock will take care of the eggs for about 3 days, the juveniles will hatch, and after 5-6 days the juveniles will be free to swim. The broodstock will take care of them until the juveniles are free to eat. 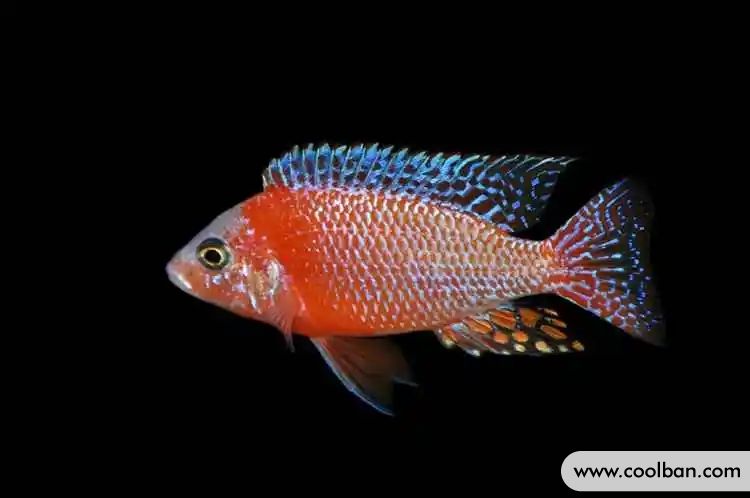 Ruby fish eat a lot and are easier to raise. It is worth noting that because ruby ​​fish are short-tempered and like to feed on the juveniles of other fish, it is recommended to keep them separately.

The ruby ​​fish is robust, has a large appetite, is easy to raise, does not require high water quality, and prefers neutral water. They can grow well in water temperatures above 20°C. Ruby fish do not choose food, like to eat animal bait. After swimming horizontally, the juvenile fish used egg yolk as the bait, and after 5 days of culture, the food powder was gradually added to start domestication. The method of food habits is: the egg yolk and the food are mixed with water to form a paste. The weight ratio of egg yolk and food powder is 3:1 on the first day, 2:1 on the second day, 1:1 on the third day, and 1:1 on the fourth day. 1. The fifth day is 1:2, 1:3, and the sixth day is all fed with food powder. After 20 days, all juveniles were cultured.

How to raise guppies